Well this is a year to remember, although probably would be best forgotten.

I've cross stitched, and cross stitched more this year than I have for a few years and my other hobbies have gone on the back burner.  I think I'd like to just blog by pictures.  Just a record of what I've been doing.

I'm going to have to relearn how to post photo's though, and will I keep it up - well who knows.

I'd like to make a new page with a List of my UFO's - just somewhere I can look and see what I have.

Well here we are, in Lockdown, in the UK.

So, how are you all doing?
Does anyone still blog?  I'd love to know, if you're reading this.

This is a blog

Well amazingly I've managed to get into my blog!

Can I remember how to do it?

I so wish I could go back a few years to when everyone blogged and I could keep up and read what everyone was up to.  Long gone is the blog reader I used to have on Linux, it was so easy then to keep up.  I think most people have moved on to Facebook and/or given up stitching.  I hope I can reunite with those blogs I was so fond of.

If you're reading this, please leave me a message, so I can save your blog to check in on.

Well I still have a blog, just need to use it.  Facebook seems to have changed the way we communicate with our crafty friends, well certainly for me.  I really miss blogging, and have just been having a browse around some blogs that I used to read years ago, it's nice to see that some of you are still happily blogging away.  And it's sad to see that others no longer blog - and of course I can fully understand this as I seem to be one of them!  I am still crafting but stitching is not very often nowadays.

Chris. xx
Posted by Stitcher at Tuesday, October 13, 2015 No comments:

Just testing that my long and inactive blog is still in blogland and not died.  So it seems that I may still be able to post.  I passed the first test of logging in!

I'm back in the land of technology having updated from my old Linux machine, and my old Blackberry.  I now need to see what I can find out there to make things easier for posting.

If anyone is out there and reading this, any recommendations for blog backgrounds, easier way to post, follow blogs etc.........gratefully accepted.

Can you believe its nearly December.  Christmas is coming, the goose is getting fat and all that.

I have a few photos on my phone of crafting so how to get them on here, is something I need to work out.

Hi Dawn, you have left me a couple of messages, but I cannot reply as I do not have your email address.  Comments are moderated so if you leave me another message with your email address I won't publish it for all to see, but can reply to you.

A couple of little stitches

I still have loads to share, and promise to get 'a round to it'.  The weather has not been so good here over the weekend - it's really dull so not good light for photography, but here's some I took earlier. 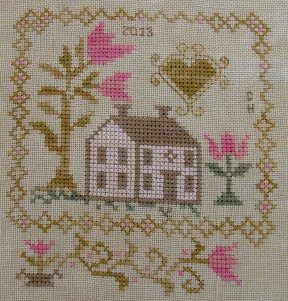 This is the second time I've stitched this, the first time was for an exchange and I made it into a pinkeep.  I think I'll probably finish this the same way.  I am now selling the pattern if anyone is interested - just get leave me a comment.
*-*-*-* 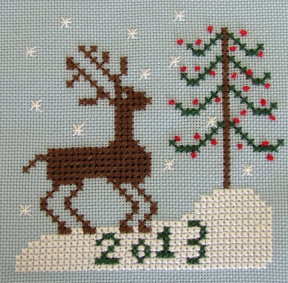 This was a nice quick stitch, again I'm now selling the pattern if anyone is interested. 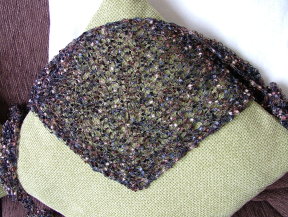 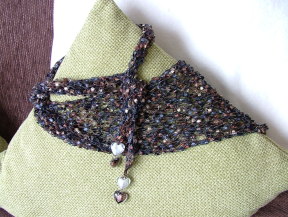 A bit of knitting has been done here too.  This is lovely yarn, such lovely colours and really sparkly, but that doesn't show up.  It is a shawl/scarf.  It knits up as a triangle you just keep increasing, and then cast off loosely, it then becomes more like a narrow scarf. (it's really stretchy).  It came with these wonderful glass heart beads to put on the ends.  However, it's not for me.  My sister fell in love with it at Easter, when we visited the Cotswolds.  So I said I'd knit it for her if she bought one.  If you ever visit Bourton-on-the-Water you must call in the craft shop - Bourton Basket, where we purchased this. 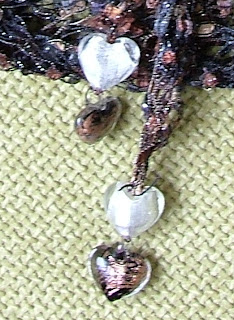 *-*-*-*
Thank you all for taking the time to comment on my UFO, I've not stitched on it again yet, I need to get a frame out to put it on.  I will continue with 2 strands for a little bit and then decide on what to do.

I really need to de-stash, and I meant to say in my last post - as I am clearing out 100's of magazines - just let me know if there are any you are looking for and if I have them you are welcome to them as long as you send me an SAE.

I'm sure most of us stitchers have UFO's?  Well I have begun a sort out of my loft which contains a variety of stuff, including lots of my craft stash.  the first thing I am getting rid of is my stitching magazines, and other magazines too.  I first began collecting magazines when the first issue of Needlecraft was issued in 1990, and then went on to collect the other cross stitching magazine publications which followed hot on the heels of Needlecraft.

Anyway back to the original subject UFO's,  I have been thinking about digging out this sampler for quite some time now, and yesterday I was in the loft just looking at my stash of fabric, and this  UFO appeared in a box (I bet if I had gone looking for it I wouldn't have been able to find it).  So  I pulled it out and started wondering why it became a UFO?  I have always had a love of samplers and still love the look of this one and the colours. 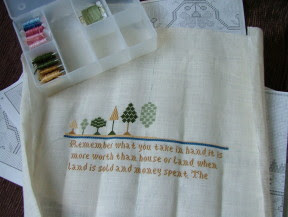 It's stitched on 36 count cream Edinburgh linen, and I have stitched it two over two, now the pattern called for it to be stitched one over two, but I didn't read the instructions.  It's from 1992/1993 and I'd always stitched with two strands so I suppose I'd never even thought of anything being stitched just with one strand.  So my guess is that is the reason it became a UFO.  Now I really want to finish this, but my question is, do I pull it all out and start again, or do I just continue with using two strands?  Will my stitching look different now to what it did then, I'm sure my stitching is probably different after 20 years.  What do you all think? 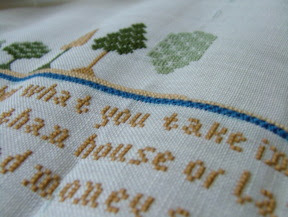 And for anyone wondering, this sampler pattern appeared in an earlier issue of Cross Stitch Collection, I know this because I made a working copy of the pattern.  I have no idea which issue, so I am going to have to look through the magazines to find out which one, and then I can show you what it will look like finished.

This linen by the way is beautiful, does anyone know if you can still by Edingburgh linen?
Why is this post in blue at the top - well I have no idea?  I've tried everything but it will not change, and it also appears to be underlined, but the underlining does not show in 'preview' so whether it will show once I 'publish', who knows.  (i think I've managed to fix it post publication)

Thank you to those of you who are still out there reading my blog, and those who took time to leave me a comment I appreciate it.

I have lots to share, but I'm just taking it slowly, I need to rediscover how to edit my photo's and maybe a change of software might be in order.  My expert is home until tomorrow, so think it's time to wake him up, it's nearly 16 hours since he went to bed, but he had been up for over 36 hours.

See you all soon.